Wow this week was long. I’m working on a post about the Wooing of Boyfriend, but I had to work late tonight and I have to pack and I’m drinking so it just ain’t happening tonight. However, there are two important things I need to go over:
1. I WAS RIGHT.
Remember that time I was right about the snow? And I created that picture that said I was right and stated how I wanted to use it as often as possible? Well, guess what, I WAS RIGHT AGAIN.
This time, it was about the movie Red State. Boyfriend and I both aren’t really a fan of horror/torture movies. But he listened to a bunch of podcases about it and said it was on Netflix and he wanted to watch it. The following convo took place:
Boyfriend: Do you wanna watch it with me or should I watch it by myself?
Me: Umm…. [trying to be the coolest girlfriend ever but also knowing I’m a wuss] maybe?
Boyfriend: Are you scared?
Me: No! Ummm…I kinda wanna see it.
Boyfriend: You don’t have to look during any bad parts.
Me: Yeah, and we’re not watching it on a big screen. Just my tiny laptop
Boyfriend: It’ll be fine.
Me: [the coolest girlfriend in the whole wide world] Okay
Famous frickin’ last words. We watched it Wed night, and that shit was fucked up! I mean the whole thing got pretty bloody, but there was one particularly awful scene that stayed with us the rest of night . I won’t tell you the ending, but if you want some advice, then SPOILER ALERT [highlight to read]: Don’t get invested in any of the characters. Anyone. Seriously. Also, stay away from saran wrap.
Anyway, it left Boyfriend pretty disturbed too. So THERE! I was RIGHT! It was a terrible idea to watch this movie.  Sure, I didn’t say “It’s a terrible idea to watch this movie,” but Boyfriend could sense my reluctance. Unfortunately, instead of being like this: 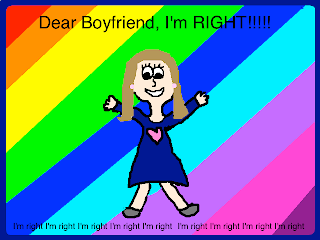 I’m more like this:
2. I’m going to seaside town with Boyfriend this weekend! YAAAAY! Allie’s coming too. She’s been feeling a bit insecure after those things imaginary reader was saying about her, so I decided to bring her along this time. I hope the witch doesn’t find us.
Ok, it’s time to drink and pack and hope I don’t forget clean socks and underwear and deodorant because I did too much drinking before packing. Have a great weekend everyone!!
Posted by Gia at 7:00 AM