So, Allie wanted to dress up this year. She insisted on being a mummy, but instead of wasting using toilet paper, she wanted me to use sparkly netting: 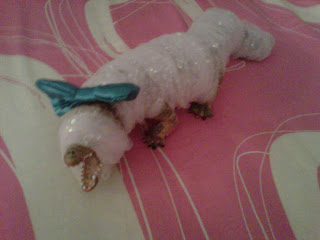 I told her people might not “get” her costume, but she didn’t care. I told her that people weren’t going to want to give her candy, and she got MAD.
I told her to behave herself, and she promptly tried to eat my witch (note: not this witch. Allie could totally eat her for me.) 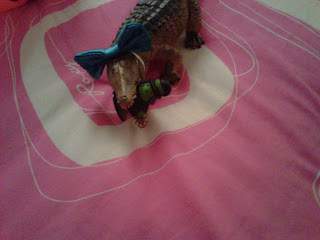 Sigh. Guess I’ll be having some awkward conversations with the neighbors while trick or treating tonight. Gators. 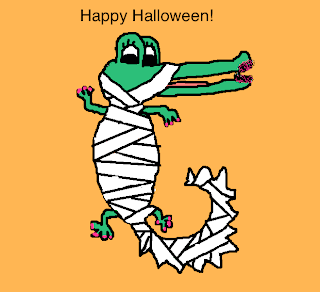 Lots and lots of dolphin statues (and tiny cherubic children). But we stumbled upon one house that I’m pretty sure is occupied by a witch. 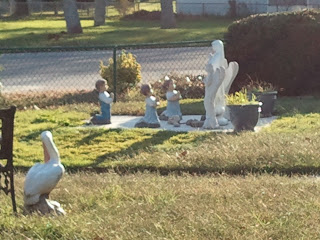 You think that’s a bunch of children praying to the Virgin Mary, eh? That’s not Mary. That’s the witch with a shawl on. She uses children to do her evil bidding. It lets the other witches know she is the Most Powerful Witch ever. 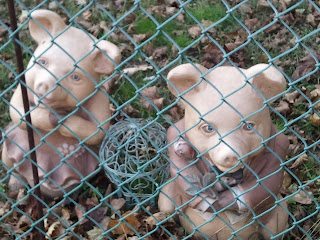 Aww, cute little boyfriend-and-girlfriend pig statues, right? WRONG. Clearly, a man once wronged her, so the witch turned him and his harlot into pigs! And then into statues! If you stared into their eyes, you could see their souls crying. 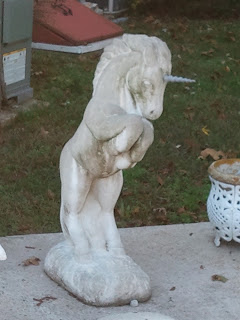 Tra la la what’s that? OH IT’S A GIANT UNICORN STATUE. Well…okay, unicorns are pretty kickass. I named this one Starlight. I bet it belonged to Good Witch. Evil witch murdered her and stole Starlight. She uses the horn’s magic to stay young forever. Or fly.

Other Evidence: Um, we didn’t get pictures of the whole backyard because I was getting a little spooked and I was scared the witch would come after Boyfriend, but there was lots more statues. Including a pregnant or obese squirrel statue on a birdbath. Either the witch was angry at a pregnant woman so she turned her into a squirrel statue, OR she hated that squirrel that so she made an example out of it. Let’s just say all the other squirrels were keeping their distance.

AND – I totally got a few weird hive-type things on my arm, hand, and face after giggling with Boyfriend outside of the witch’s house. My fault, I know. I’m not saying she definitely hexed me, buuuuuuut that’s probably what happened. So yeah.

Conclusion: DEFINITELY a witch. We don’t even need to tie her up and throw her in a river to see if she’ll float so we can light her on fire. Witch.

Excuse me, I’ll be off buying magical protection crystals to guard myself and my loved ones. Let’s hope the witch doesn’t read blogs.

Allie is looking as beautiful and feminine as ever: 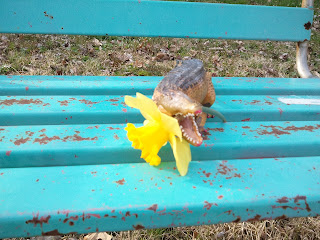 So, I’m still trying to figure out my blogging schedule. I’m way, way too lazy busy to write/draw decent posts five days a week. I have couches to sit on things to do, jigsaw puzzle puzzles to work on places to be, and Boyfriend to snuggle with B- actually wait, that one is good as it is. Yeah. But I legitimately have important things to do this week, such as:
1. Put together a lamp so I have enough light in my living room to work on said jigsaw puzzle VERY IMPORTANT THING at night during the winter.
2. Find a way to make room for some real drinking glasses in my kitchen cabinets. Apparently my uppity Boyfriend didn’t think that solo cups and plastic tumblers that may or may not be chock full o’ BPA were good enough to sip his whiskey out of, so he got me some real glasses.  They deserve real shelf space, which will involve getting a step ladder and rearranging things. Le SIGH.
3. Come to terms with the fact that I’m probably the only 20something in the world who has never owned an iPod before and learn how to use my new birthday present.
4. Laundry. Bah! Seeing as how the electricity in our apartment is on the fritz (the circuit panel needs to be replaced) and the circuit breaker buzzes every time we turn the washer on, it sure makes doing laundry a LOT more exciting. The electrician told roomie and I not to worry too much, just don’t leave the apartment or fall asleep while doing laundry. Oh and periodically touch the circuit breaker box while the washer/dryer are on to make sure its not hot and there’s not, you know, A RAGING FIRE IN OUR WALLS.
5. Wine drinking. See #4, living with a constant threat of raging wall fire.
There’s about a hundred more things I need to do, but since those top the list as the most “interesting,” I’ll just shut up here. My point is that I’m not sure if I’m going to be posting MWF or some combo M/T/Th/F and a pic on Wed, or something else entirely.  Bear (growl) with me. Snicker.
Posted by Gia at 7:00 AM 4 comments:

Email ThisBlogThis!Share to TwitterShare to FacebookShare to Pinterest
Labels: allie, apartment fires, blogging about blogging, i love wine, i need to move out

So…I May Be Psychic.

I want to talk about a dream I had Tuesday night. I know, I know, listening to someone talk about their dream is only slightly less painful than listening to them talk about the traffic, the weather, or what the [generic sports team] is doing wrong this season. Bear with me, I’ll keep it short.
Tuesday’s sleep was actually filled with a bunch of crazy/psychedelic dreams, including a very disturbing one where I was dying (eath-day is a touchy subject for me. Not going there today). BUT, at one point I had a very clear dream: I was in a house (presumably mine) with my parents and sister, and a camel had wandered into the front yard. We were all like, “Whoa holy shit, it’s a camel!” And kept trying to use our phones to take a good photo of it. One of us got a great one of the camel with its eyes half opened and a dopey smile on its face, like it just smoked a giant bowl of weed. End dream.
See, that description wasn’t too painful, right? Anyway, I turn on the news Wednesday morning and HOLY SHIT A BUNCH OF EXOTIC ANIMALS ARE LOOSE IN OHIO.
Whoa. Clearly my dream was a premonition.
Ok I know technically a camel wasn’t one of the exotic animals released, but c’mon…lions, tigers, bears (oh my!), monkeys, leopards, wolves, etc etc.  A camel doesn’t NOT fit right into that mishmash of the animal kingdom, you know? Sure it’s slightly less…bitier, but just as out of place in Ohio.
[Side note: Seriously, how bonkers was that guy?? Can you imagine if your school was closed because there was a bunch of man-eating lions and tigers were roaming around? Shit just got real. Life, survivor style.
Also, one article reported that a “monkey with herpes” missing.  First thought: Monkeys can get herpes? News to me. I’ve only heard of kitty herpes (and feline aids…mrawr). Second thought: Is anyone else suddenly worried about unprotected monkey rape? As in, rape by monkey, not vice versa.  Though I am definitely opposed to raping monkeys.]
Anyhooooo. My point is that my loose camel dream was clearly a premonition, and I’m clearly psychic. It looked something like this: 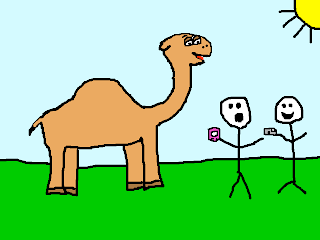 UPDATE: As I was writing this, my roommate randomly turned off her blowdryer, poked her head out of her bathroom where she’s primping for her date, and went “Hey, did you hear about the zookeeper who killed himself and like 50 wild animals were let loose in Ohio??” Seriously, she said it out of nowhere! The last things we were talking about were what party she was going to Friday and what time the electrician was coming tomorrow. Creepy, right? I’m DEFINITELY psychic.
Posted by Gia at 7:00 AM 2 comments:

I got this email from Boyfriend: 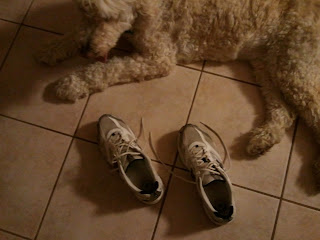 He tried to convince me he went up in the Rapture. I'm calling shenanigans. I see some fundamental flaws with this photo:
1. Why are his shoes the only clothing left behind? His pants are holy enough to go with him, but his shoes aren't? Unless he was completely naked except for running shoes, which is a possibility. Hmm.
2. Seriously, there is no WAY he's making it to heaven before me. See rape jokes.
3. Ok, maybe he'd leave his kids. And maybe he'd leave me. But he would definitely NOT leave his dog.
3a. She looks rather unimpressed by his supposed naked floating away in the sky.
Results: fake
He won't be able to get rid of me that easily.
Posted by Gia at 8:00 AM 2 comments:

My profile picture is a drawing of Allie, my Sexy Alligator. She really exists, see: 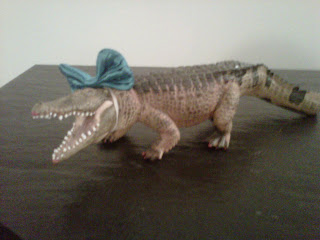 Yes, that is nail polish on her toes (claws)? And lipstick. She has glitter on her too, but that’s harder to see.

So, how did I happen to come to own such a majestic creature, you ask? Well, she started out as an inside joke between me and Boyfriend. I met Boyfriend through our work, and it was an arduous, seven-month courtship before I finally convinced him to date me.  In the meantime, we gradually escalated our interactions from work email to inappropriate work email to gchatting.

Around the same time, we had a super annoying auditor in our office.  This conversation took place one day, before Boyfriend was boyfriend, and was just inappropriate coworker.

me: Gah!
Sometimes I wish you were a real bear who'd maul people
I'd sic you on auditor
Boyfriend: I'll kill her, but you have to dump her. You know all the spots in around here
me: If we lived in Florida we could feed her to gators, like on nip tuck
Boyfriend: Let's get one!
I have a creek
me: Reallllly?
Boyfriend: yes a small one
me: WOOOHOO!
So, I got Allie. I bought her from a store in the mall (I know, I know. Those places are just gator mills. I should have went to a breeder, but I was pressed for time). I wanted to name her Sasha Fierce or Fluffy, and Boyfriend wanted to name her Wendell. We settled on Allie.

He and I switched off caring for her (though she mainly stays at my place now, where he can visit). She acts quite differently around us, though. (She has a little crush on him. Dealing with our relationship has been hard for her, but she's coping.) Around him, she pretends to like golf:


And spends time in his creek: 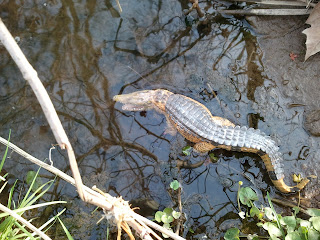 But at least she makes friends: 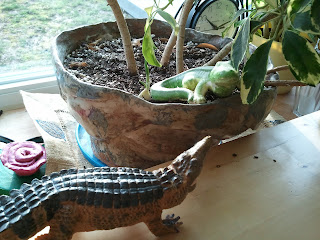 Boyfriend didn’t understand that she is a classy gator, though. At first he was a little confused about how to get her home:


But he learned.
I think Allie is much more comfortable with me. She’s really quite the girly girl, who likes clubbing: 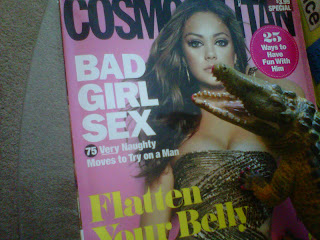 We have the same awesome taste in music:

Shes a young gator, though, and still a bit immature:

And maybe not completely trained:

But gosh, she’s cute. And when it comes to important things, she takes after me. 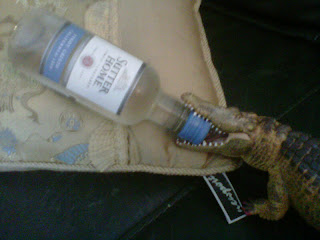 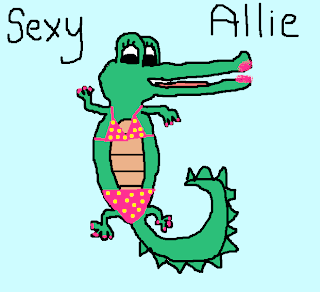